This past week WEFTEC celebrated its 90th anniversary in Chicago, IL, the place of its founding.  As part of the conference, attendees could elect to participate in any of the tours to different waterworks in the Greater Chicago Area.  I went on the tour to the McCook Reservoir.  The McCook Reservoir is a project that was enacted by Congress in 1988 to mitigate flooding and to protect watercourses from combined sewer overflow (CSO) during high storm events.  Combined sewer is the combination of sanitary and stormwater flows in the same system. 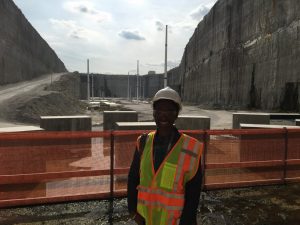 Fig. 1. This first stage will hold 3.5 billion gallons when done. Behind me you can see the baffle blocks, our tour bus and the poles which will hold the solar panels that will provide energy to the aerators. 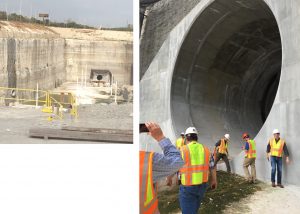 Fig. 2. A view of the Stage I pit at the other end. The main inlet tunnel is visible. The picture on the right gives a sense of scale of the main tunnel – a 33 ft. diameter inlet.

When complete the reservoir will be able to hold 10 billion gallons of CSO and will benefit the Greater Chicago Area including 36 suburbs, 1.5 million structures and 5 million people.  Ultimately, the completion of this reservoir will result in the prevention of overflows and consequential discharge of untreated sewage water into Lake Michigan, Chicagoland’s drinking water source.  The reservoir itself, is built on site of a large rock quarry on the property of the Metropolitan Water Reclamation District of Greater Chicago (MWRDGC), the local sponsor, owner and facility operator.

The reservoir is being built in two stages.  In Stage I, they have already mined the limestone out of the first pit.  By December of 2017, Stage I will be complete as they bring the first pit up to full operation before completing the second pit of Stage II.

The major components of this $1 billion-dollar mega-project include: an overburden cutoff wall, distribution tunnels, a main inlet tunnel, dewatering pumps, gates, valves, hydraulic structures, aquifer protection, and an aeration system.  Completion of the entire reservoir system is not anticipated until 2029.